Small rural emergency departments are said to be not worth worrying about. Last post we tackled the question of whether they saw too few patients to be important. We saw, from the study described, that although each facility saw only small numbers, together they combined to be a significant proportion of a state’s emergency medical presentations.

But perhaps the patients that these small rural emergency facilities manage are not really that unwell. Perhaps these facilities provide little more than dressings and antibiotics?

Like last post, we looked at what was happening in our state of Victoria, Australia. We turned again to the 20,000 emergency medical presentations analysed in our original study as they were managed in six small rural hospital-based emergency care facilities. We compared them to the one million patients seen in Victorian metro hospitals. We used the 28 level codes developed by the Independent Health Pricing Agency for calculating ED activity. We created two 28 by 5 charts to show the data. We have decided not to show them to you. Instead we created a Wordle. 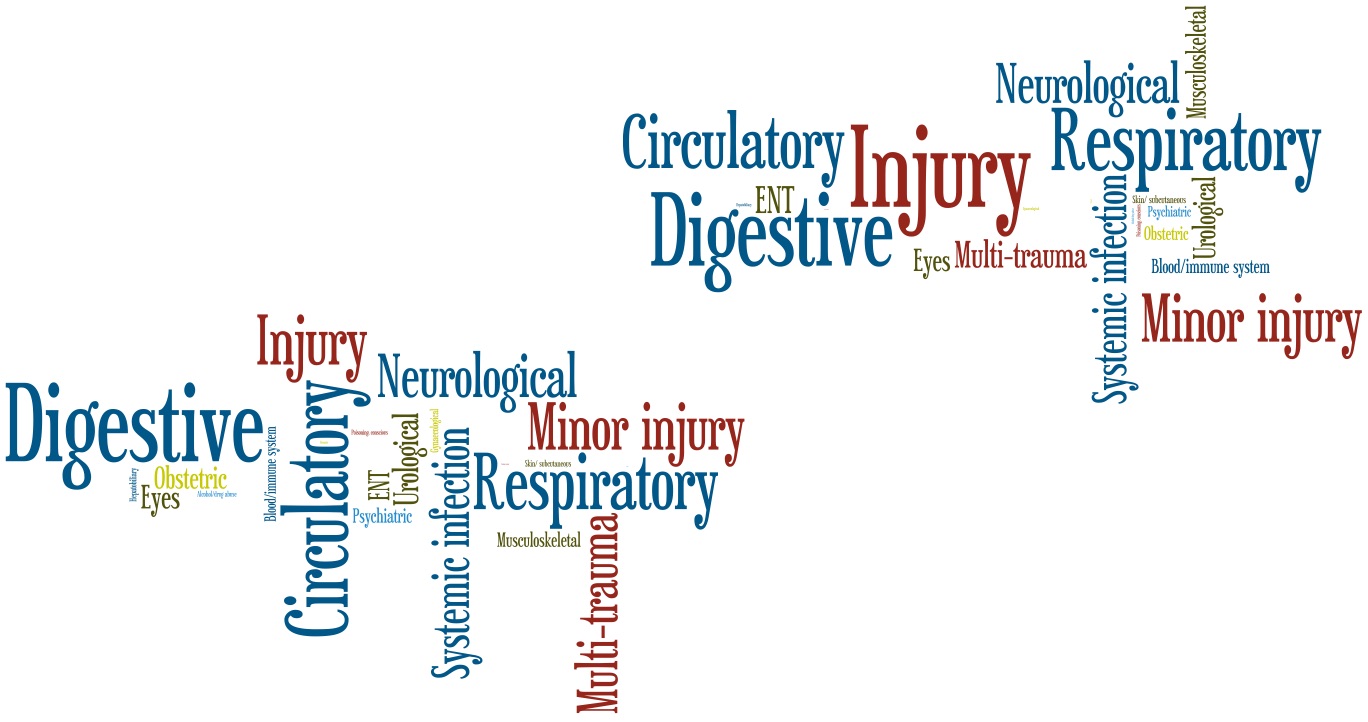 On a wordle, each word is proportional to the number of items represented by that word. The bigger the word, the more patients presented with that diagnosis.

At a glance, you can see the the same spectrum of patients for both groups. Can you guess which is small rural and which is metro? You should be able. Respiratory, circulatory and digestive problems are common at both. So is injury, but small hospitals see more minor injury, and less multi-trauma. They are not the same, but they are not vastly different either.

This makes sense to me. I never really understood how experts could be so sure that small rural hospitals saw no sick patients when rural patients are thought to have more risk factors and poorer health, present later, don’t like to travel as much, and don’t call the ambulance as often.

They found that a wide range of problems presented and that most of the common procedures were performed. Most importantly, almost 6% of 14318 emergency patients were in the two most urgent triage categories.

There is a vast difference in settings and scales used by rural emergency departments reported in studies over the last 30 years that it is difficult to compare them.

They found that the most common presentation was for injury or poisoning, and that a lot of patients presented outside of business hours. There were some urgent patients but this was only a small proportion of presentations.  Nurses also managed many patients without medical input.

This study highlighted the need to support nurses as practitioners, and called for the use of common classification systems within the ED for ease of comparison.

The overall aim is to introduce an acute coronary syndrome pathway to Southwest Victoria and evaluate its impact by improving access to evidence-based acute and follow-up cardiac care through the provision of:

The first quarter SHED project results are currently being extracted for the 6 participating Emergency Departments. Between January and March close to 5000 people presented to an Emergency Department and saw a clinician. Overall the patient gender breakdown was fairly even, and weekdays saw higher patient volumes than weekends.  When we have extracted a full years’ worth of data we will be able to determine trends in ED presentation. Over the next month the project team will be visiting participating hospitals to feed back the first quarter findings to the ED staff. We would like to thank the hospitals and staff for their continuing participation and we look forward to our next visit.

A research project has started in south-west Victoria to find out why people who suffer major trauma head injuries recover better in city areas than in country regions.

Deakin University Warrnambool Campus PhD student Ben Fisk said there was a common belief that people injured in metropolitan areas fared better than those with comparable injuries in country areas.

“Anecdotally there seems to be different outcomes between city and country regions so our first task is to identify and analyse the existing data to see if that is the case,” Mr Fisk said.

The research will consider the total range of trauma head injuries from car crashes and home falls to farm and industrial accidents.

Mr Fisk said his research would investigate and report on possible factors which could influence the apparent imbalance.

“The most obvious would seem to be the time delay in getting injured people to treatment but there hasn’t been a study into the whole situation which will make the findings important for future planning.”

“The goal for this year is to create a picture of what is happening in Western Victoria and compare it to Melbourne.”

Mr Fisk comes from a paramedic background and has worked with the Victorian Ambulance Service in Geelong and Warrnambool for the past nine years. He hopes to use his research to learn more about pre-hospital management systems and how rural and regional people access and utilise ambulance services.

The impact of an emergency rescue helicopter in south-west Victoria will be considered in the three-year study. “There are not enough statistics yet in the south-west area to judge what impact it is having,” Mr Fisk said.

The research will also look at the processes when head trauma patients are taken to small country hospitals.

The research has been funded by the Windermere Foundation which provides special grants for the development, introduction and/or evaluation of new practices, models and interventions to improve health in country Victoria