The CREM team has received funds from the Australasian College for Emergency Medicine to develop an inter-professional short course focussed on the management of trauma patients in rural areas.  Although rural and metropolitan clinicians may be required to manage similar patient presentations, rural practice presents unique challenges related to resourcing and clinical exposure not often encountered by medical professionals working in larger towns and cities.  In rural areas, there is a higher likelihood of nurses, GPs or paramedics working in isolation and being required to manage critical patients with fewer resources.  With this in mind, we think there is a great advantage in bringing together clinicians from different backgrounds and providing them with the opportunity to learn from, with and about each other.  Often, the difference between a case that is managed well and one where multiple errors occur is the way in which the team interacts.  The way in which a team interacts is often dependent on the background, experience and attitude of each person in that team.  By developing a short course based on the principles of inter-professional education, our aim is provide rural clinicians with the tools to adapt to, contribute to, and lead within multi-disciplinary teams.

We aim to run a pilot course in November 2016 in order to refine the facilitation and debriefing skills of the CREM teaching staff, and to run the first course in January 2017.  The course format will include an online component and 2 day workshop utilising team training activities and patient scenarios using high-fidelity simulation.  Scenarios will include pre-hospital and in-hospital cases providing participants with the opportunity to develop patient management skills in an environment they may be unfamiliar with.

Welcome to your medical student Emergency Medicine rotation. You may feel very familiar with emergency medicine. It is a staple of prime-time television drama, and you will have almost certainly visited the emergency department during your previous rotations. Other specialists may have given you their opinion, not always flattering, of the emergency department. We hope that while you are with us, we will deepen your understanding of emergency medicine, and help you learn skills that will help you throughout your medical career.

There will certainly be emergencies. On any shift, you could suddenly be a practical part of a team that is striving to save a patient’s life. You will learn the basics of keeping a patient alive. But you will also find that critical care is not the only part of emergency medicine. It is not even the most difficult part.

Emergency medicine deals with undifferentiated illness. By the time a patient reaches the inpatient ward, they often have a label of pneumonia, angina or appendicitis. In the emergency department they had shortness of breath or abdominal pain. Emergency medicine is a diagnostic specialty. Most of our time is spent trying work out who is really sick, without taking too much time or ordering unnecessary tests. The most stressful aspect of emergency medicine can be deciding whether to send home a patient with a headache that is probably a migraine, but just might be a cerebral haemorrhage.

The emergency department is also where the hospital meets the community. On a single day you may speak to general practitioners, specialty units, community teams, health administrators, paramedics and the police. The stresses on the health system are often most obvious here. You will see how people move between various areas of health care. You will see how they can end up in the emergency department when they fall through the cracks. You may also see how the stresses of shift work and time pressures affect you.

In these few weeks, you will perform many practical skills for the first time. Minor procedures are common in the emergency department. You should have practiced these tasks in the skills lab, but performing procedures on real people is different; they feel pain, they move, their anatomy is unique, and they may ask you to stop. Practicing procedures on patients will make you feel uncomfortable. To become a practical doctor you must become comfortable with being uncomfortable. We will be here to help. You are part of the team, and performing procedures, if consent is given, that the patient needs. It gets easier. You need to become comfortable with the basic skills, so that when you are an intern you can become uncomfortable again with even more advanced tasks.

So welcome again to your emergency rotation. It might not be what you expect, but it may be what you need.

Director of South West Healthcare Emergency Department and the Centre for Rural Emergency Medicine, Dr Tim Baker said ‘our aim is to help recruit rural medical students, train them locally at Deakin University and provide as much of their specialist training as possible, here in the country. This is the best way to have doctors build country lives and, therefore, stay in the country.’

In addition, the Emergency Education and Training (EMET) program provides surrounding small hospitals, including Portland, Camperdown, Terang and Hamilton with visits, assistance, and training from the emergency specialist doctors based at Warrnambool.

South West Healthcare is one of 43 EMET hubs across Australia. In the past 30 months, the EMET program has been responsible for delivering more than 3,000 training sessions to 25,000+ doctors and nurses in more than 200 regional, rural and remote hospitals.

The EMET programme seeks to improve care for patients requiring urgent and emergency medical services in rural and remote areas by providing education, training and support to the large number of doctors and nurses working in the smaller hospitals and emergency care services who are not specifically trained in emergency medical care.

Dan Tehan, Member for Wannon said “that programs such as the EMP and EMET help to encourage health professionals who are committed to rural and regional areas at the completion of their training.” 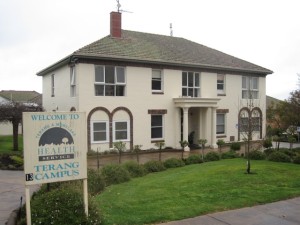 Small rural emergency departments are important. They are a significant fraction of a state’s emergency medical system. Although they each see only a few thousand patients a year, as a group they are likely to treat more emergency patients than the largest city hospital. It is a myth that they only deal with minor ailments. Many isolated rural hospitals receive ambulances because ambulance services are reluctant to send their only local ambulance out of area. In addition, many patients with serious illness come directly to the emergency department without calling an ambulance.

There is little ongoing research into how these departments operate, and how their performance can be improved. Here we offer three ways to improve emergency care for communities around small rural hospitals.

Provide a simple access point for rural families, and advertise it.

We have found that country people are uncertain how to access help in a medical emergency. When we asked farming families to nominate their nearest emergency department, 10 % incorrectly nominated towns with no emergency department at all. Only some of these towns had a medical centre. Many studies have demonstrated rural families’ reluctance to call ambulance services. It is easy to imagine a scenario where people drive through the night to find the only available emergency care was in the other direction.

Improve co-operation between rural hospitals and ambulance services. Work out the number of critical care procedures required each year, and use simulation to keep a small number of clinicians competent to perform them.

It is hard for a small town to recruit enough doctors with critical care skills. It is just as hard to recruit paramedics with those skills. And there are not enough emergencies in most towns to keep a full complement of doctors, remote area nurses and paramedics from becoming rusty. Unfortunately, there are often too many to ignore. And unfortunately, a helicopter service is not always available either. Many small towns have a hospital and an ambulance base, but their rosters are not co-ordinated. One day there will be an intensive care paramedic and General practitioner Anaesthetist in town. Later in the week there will be nobody with critical care skills. An integrated system will also provide certainty for rural general practitioners who are concerned that they may have no role in rural emergency care in the future.

Add a key performance indicator for regional emergency departments that gives a minimum percentage of transfers from their surrounding small hospitals that must be accepted.

Every emergency department has an Admitting Officer to receive calls from surrounding health services. Most are helpful, but to meet the performance targets of their own department, they often become Deflecting Officers who refuse patients when they are busy. There is little downside to this for large hospitals, but a doctor at a small hospital can waste many hours looking for someone to accept his or her patient.

These three tasks – advertising a single access point, co-ordinating critical care cover, and auditing the responsiveness of regional services – will require different approaches in different jurisdictions.  They will also require research, so that the solutions can be well targeted and evidence based. The Centre for Rural Emergency Medicine is committed to assisting in this process.

The hospital accepted all patients from the crash, including those with serious chest and spinal injuries.

Associate Professor Tim Baker, from the Centre for Rural Emergency Medicine (CREM), said the emergency department had successfully coped with the situation.

“On the night of the bus crash the system worked the way it was planned,” Associate Professor Baker said.

He said the department had undergone a transformation over the past 12 months, with recruitment of experienced doctors, installation of new equipment and emergency nurses gaining experience in Melbourne trauma centres.

“The terrible and unfortunate events of the Portland bus crash gave the hospital its first chance to fully demonstrate these changes,” Associate Professor Baker said.

“It succeeded because of the work done over the past few months. Months of preparation have gone into last night running smoothly,” he added.

Associate Professor Baker said the successful response showed the benefits of having rural doctors and a responsive emergency department at Portland.

The hospital has remodelled its emergency department as part of its commitment to improving services to the Portland region.

Two hospital doctors, two specialist emergency physicians, a general practitioner and many nurses trained specifically in trauma care were involved in the response on Thursday night.

Patients were stabilized and given pain relief. The most seriously injured patients had their injuries investigated by CT scan and were transferred to The Alfred and South West Healthcare in Warrnambool, where appropriate surgical units were expecting them. Stable patients were treated locally and admitted to Portland District Health or discharged.

At 2pm Friday … patients remain in PDH with minor injuries. Their conditions are stable. Nine passengers and the driver were taken to the hospital after the bus crash which claimed three lives at 6.40pm on Thursday

He said two specialist emergency physicians work in the emergency department each week. “They have focused on staff training, working with local general practitioners, improving protocols, stocking of appropriate equipment and streamlining interaction with pathology and radiological services. In particular, they have worked on improving the way patients are transported from Portland hospital to city hospitals.”

Associate Professor Baker said recent media reports had highlighted the difficulties in getting country patients to the city for surgery.

“CREM has a voice on regional committees overseeing emergency transport of patients, and staff have been trained in the best way to have the system work for their patients.”